Posted on September 9, 2012 by spindizzy

What to do with those skeins of “Art Yarn”

After all those workshops and articles, you end up with a collection of small skeins of scrumptious handspun yarn carefully stored away, looking for a project. 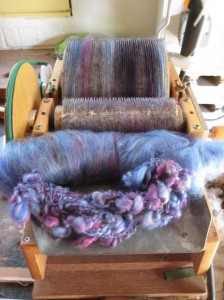 Here’s superfine merino and silk, a single batt from the carder spun with coils or bobbles or boucle, into maybe a 25 metres skein, too nice to do anything with. I’ve sometimes been disappointed with these when knitted up, but they aren’t going to weave on the loom. The lumps won’t go through the reed if they’re wound as a warp, and the effect won’t be what I want if I use them as weft, and I only have 25 metres! 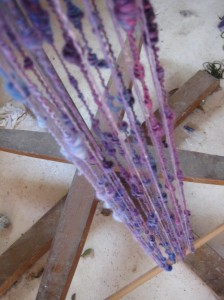 Here’s one solution (the technique is still under development). I mounted a couple of bars top and bottom of my warping mill about  6ft. apart, and wound on a single skein.  To give some stability to the finished scarf, I filled in between the fancy yarn with some toning plain handspun merino. 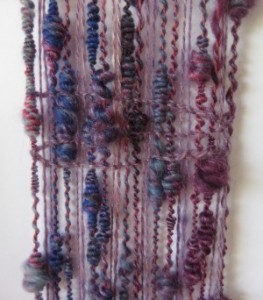 I’m looking for an open weave, which shows off the yarn but has enough stability to hold together,  so every few inches, I twined a few rows in the toning plain yarn.  Doing this by hand means that I can work round the coils. 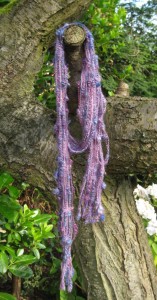 When the whole length has been stabilised with areas of twined weft, the scarf comes off the loom. Even at this stage it holds its shape well, and after washing by hand, with a small amount of fulling, the toning plain merino binds the scarf together nicely, leaving the bobbles pinned in place.

A handweavers blog
View all posts by spindizzy →
This entry was posted in Whats going on! and tagged Art Yarn, Campaign for Wool, handspun, tapestry, weaving. Bookmark the permalink.