The Biggest Rug Ever!

Last month I opened my garage aka studio in the Cheshire Open Studios Event. 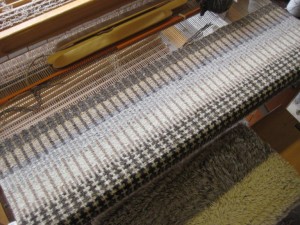 During the open studio, a visitor asked about a bigger rug, how large a rug could I weave? The loom has a max weaving width of 1.2m, which fortunately is pretty well as wide as my arms will reach with a rug shuttle. With no delay (or with only a few weeks delay to restock on warp and weft yarn) a 4’x6′ is now under way. The scaling up in terms of materials  is quite scary, the amount of warp and weft scale with the area of the rug, so the increase from standard 3’x5′ goes from 15 sq.ft. to 24 sq.ft., ie more than half as much again.
Weaving is now well under way (24″ woven so far) and I’m pleased with the progress of this rug even though it has stretched myself and the loom to the maximum. (I’ve laid in the edge warp threads outside the reed to get the last half inch of width and have brought out 2 long metal bars as tie on rods. I rarely use these, but need them here for both the extra width and strength. Luckily, the new temple that I bought last year will extend to 48″ with ease. The rug is nominally to be 6′ but golden ratio would suggest that 6’6″ will be a more pleasing, I’ll have a think when I get near the end. 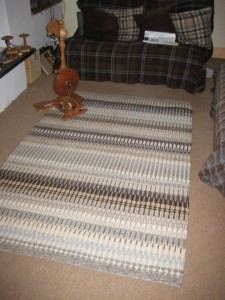 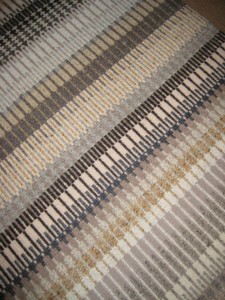 A handweavers blog
View all posts by spindizzy →
This entry was posted in Whats going on! and tagged handweaving, loom, twill, weaving. Bookmark the permalink.