The first Gladstone bag is sort of done. The fabric was marvellous, I’m really pleased with it.

The bag was pretty disastrous. At the first attempt, I slavishly followed the pattern (I should have engaged the brain a little more.) When I made the prototype, I was using a frame from a charity shop reject and adapted an almost right pattern with a very satisfactory result. For the real bag, I’d bought a bag frame and used the pattern that came with it. The frame didn’t fit the channel created by following the accompanying pattern! When I examined the pattern it was one of these laser printed on A4 computer things, with some scaling marks to check at the sides. If I’d bough a pdf of the pattern, I’d have checked them but because it had been sent with the frame, it didn’t occur to me that it would be wrong…. it was nearly 10% too big .(The opposite would have worse I suppose.) The other problem evident from making the thing up was that following the instructions meant the the channel for the bag frame had 3 folds of outside fabric, interfacing AND quilted lining. It was so thick that I couldn’t even run the sewing machine over it without a fight. I’m tempted to name and shame the kit supplier, but for now will just leave this as a warning to everyone to check a printed pattern has been printed with no scaling and if you buy a pdf of a pattern make sure that you don’t print with the “scale to fit” and double check that the measurements shown match the actual size!

I ripped all the seams, adjusted the side seams, made a completely new lining, trimmed back the quilting and tried again, checking the frame fit at each stage.  It’s nearly there now. I need to change the internal pockets a bit, and I may take the handle off (I’ve only done one so far) since they’ve instructed you to sew it on through all the layers – which means that messy stitches in a high contrast red can be seen on the pale green lining – very tacky.

As you can see, I made up 2 lengths of the tweed. The first was heather/ruby and the second was grey/ruby. The pattern is much more subtle on this one but it’s still nice. I have another bag frame to use, but will probably make another style of bag – maybe a messenger bag, with this. contrast (red) colour are showing on the pale green lining inside. I’d prefer them hidden, which means ripping the bottom seam on the lining (sigh….) and stitching through the gap.

Finally – the end of things…… 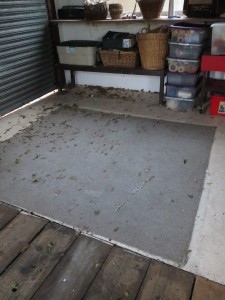 We are moving soon, and the loom has gone to a new home, it just wasn’t going to fit! (Sobs!!!)

I am researching more compact looms and have narrowed the field down to 2 but will wait until I have a new (perhaps even heated!) space in front of me to see what I can fit in.

A handweavers blog
View all posts by spindizzy →
This entry was posted in Whats going on! and tagged Bag, Campaign for Wool, handweaving, loom, twill. Bookmark the permalink.